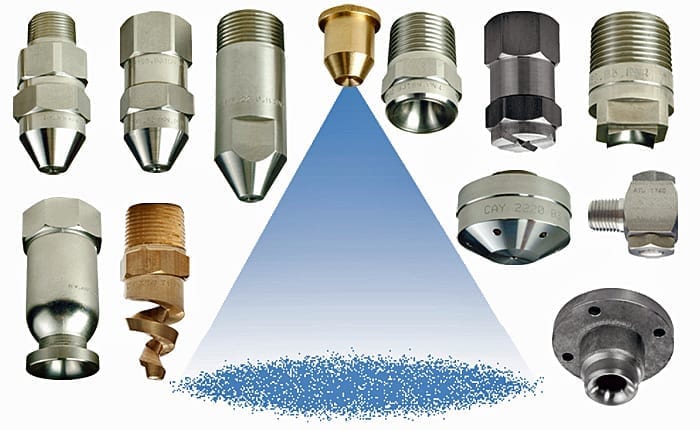 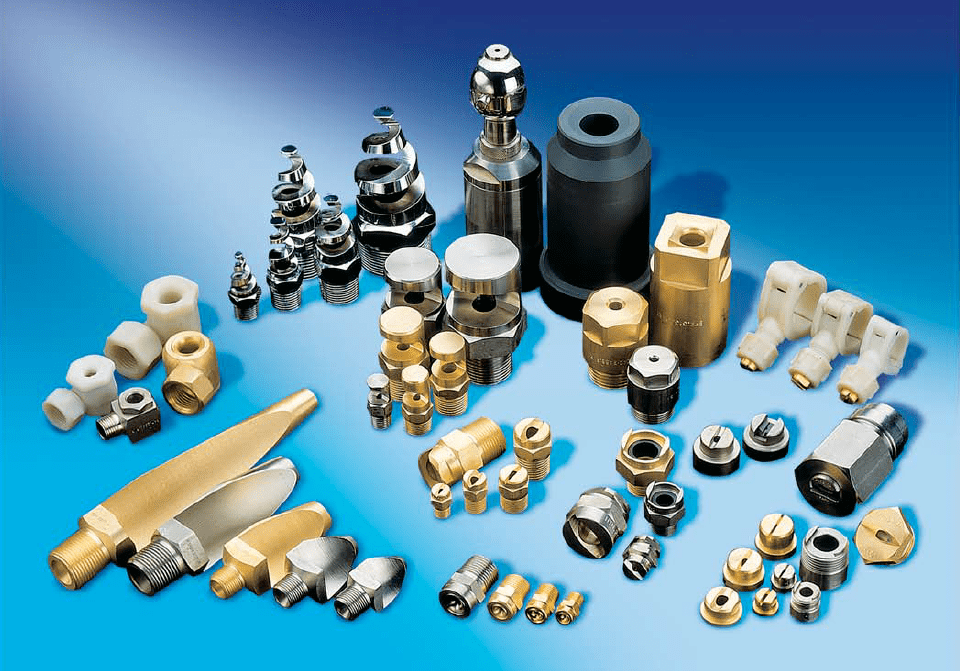 A spray nozzle is a device which makes use of the pressure energy of a liquid to increase its speed through an orifice and break it into drops.

Its performances can be identified and described precisely, so that the design engineer can specify exactly the spray nozzle required for a given process.

The relevant characteristics which identify the performances of a nozzle are the following:

1 PRESSURE NOZZLES
This is the simplest type of nozzles, where an orifice is opened into a chamber where the liquid to be sprayed is fed under pressure. A spray is produced through the orifice with spray pattern, flow rate and spray angle depending upon the orifice edge profile and the design of the inside pressure chamber.
Typical pressure nozzles are the flat jet nozzles series GA, J, GX and GY.

2 TURBULENCE NOZZLES
In these nozzles the liquid moving towards the chamber preceding the orifice is given a rotational speed component, so as to open up in a conical shape as soon as it leaves the orifice edge because of centrifugal force. Based on the nozzle design and the technique used to generate the rotational speed, the drops produced can be confined to the cone outer surface (hollow cone spray) or be evenly distributed to fill the entire volume of the cone (full cone spray).

Several technical features must be taken into account to select the proper nozzle.

1 NOZZLE EFFICIENCY
A spray nozzle is a device that turns the pressure energy of a liquid flow into kinetic energy. The nozzle efficiency can be defined as the ratio between the energy available at the nozzle inlet and the energy wich is actually used to increase the liquid speed and create the spray, the difference being the energy lost during the process because of friction. Depending on the nozzle type and for a good quality machining, the nozzle efficiency varies between 55% and 95% for the types that are commonly used in industrial processes. What above stated is not valid for air-assisted atomizers which require a much higher energy  because of the losses inherent in the energy transfer from compressed air to liquid surface.

2 DROPLETS SIZE
The droplets size depends on the structure of the atomizer, intensity of the liquids energy, liquid surface tension and density. The size of the atomized droplets is not uniform. Therefore, the average droplets size becomes an important factor. For example, the droplets size in gas quenching towers is extremely important. If their size is too big, they do not fully
evaporate leading to dust bag failure. On the contrary, if the droplets size is too small, it’s not possible to lower the temperature to the desired level and high temperature may cause the dust bags burn out. There are four ways to express the droplets size, and the Sauter Mean Diameter (SMD) is the most commonly used. It refers to the drop volume/surface area ratio and it’s often shown as D32, μm(Micron) unit. (＊1μm=10-3mm)

4 IMPACT FORCE
The impact force is the force generated by the jet of water deflected by the impact surface and its strength is often expressed in kg/cm2 or lb/inch2. The uniformity of a jet impact force and distribution influence the washing effect. Under the same operating conditions (same pressure and capacity), different types of nozzles can be used to perform an impact force test.

GENERAL PURPOSE NOZZLES
A spray nozzle is a device which makes use of the pressure energy of a liquid to increase its speed through an orifice and break it into drops.
Its performances can be identified and described precisely, so that the design engineer can specify exactly the spray nozzle required for a given process.
The relevant characteristics which identify the performances of a nozzle are the following:

This site uses cookies. By continuing to browse the site you are agreeing to our use of cookies.I agreeRead more
Go to Top